With the new job, plus the SaintConnection work, plus my columns for Voluted Tales, and my fiction, I find I just don't have time to devote to the blog on a regular basis, so I'll be giving blogging a rest for awhile. Please follow me on Facebook or Google Plus to catch up on my news.  I'll still howst folks on tour and post reviews now and then, and I'll be blogging on Girl Zombie Authors.

Florence is a friend and a fellow author at Twilight Times books. I've not read the book yet, but I have bought it because it sounds like fun. Thought you guys might be interested.

Summary: Fearing imminent death from a heart defect, Anselm Farnese, a 53-year-old, overweight Benedictine monk, discovers a 12th-century ritual in a dusty archive. If he locates a victim who—even momentarily—wishes to be someone else, he can usurp that person’s body. But he must commit himself to the Powers of Evil. Twenty-seven-year-old, cocky Professor Eric Behrens seduces an undergraduate student. Summarily fired, he curses the world and wishes to be someone else. He trips, falls, and wakes up in Anselm’s ailing body. Each man retains his own consciousness. One gleefully usurps Eric’s parents, lover and life; the other lives a nightmare as he desperately struggles to survive.

If, as Christians believe, the soul, mind, or consciousness survives the body, then, as the philosopher René Descartes tried to prove, it is separate and distinct from the body. This fantasy novel imagines the metaphysical, psychological and real-life consequences of transplanting the self in an alien body.

Buy it on Amazon: http://www.amazon.com/Anselm-Metamorphosis-Florence-Byham-Weinberg-ebook/dp/B00DSVDJ60

Posted by Karina Fabian at 12:30 AM No comments:

Summary:  Half of Er’Rets is locked beneath an impenetrable shroud. On the side that still sees the sun, two young people struggle to understand the mind-communication abilities thrust upon them.

It's called bloodvoicing. Some say it's a gift. One of the newly "gifted" wish it had never come.

Achan has been a slave all his life. Worse than a slave—a stray. He is consigned to the kitchens of a lord and forced to swallow a foul potion every day. When an enigmatic knight offers to train Achan for the Kingsguard, he readily accepts. But his new skills with the sword do not prepare him for the battle raging between the voices in his head.

Vrell Sparrow is not who she seems. She masquerades as a boy to avoid capture by the powerful forces that seek to exploit her. But Vrell feels called to help a young squire who recently discovered his bloodvoicing gift, even if doing so requires her to work with those who could destroy her.

While Achan learns to use his new ability, Vrell struggles to shut hers down. All the voices strive to learn Achan and Vrell's true identities—and a different kind of voice is calling them both.

Toward a destination that is by darkness hid.

Mini-Review: Loved it!  I read it on a trans-Atlantic flight when I should have been sleeping, but I could not put it down.  Although it's the familiar "Chosen one" plot (serf boy really hidden royalty), Willimason adds wonderful details tot he world that make the story unique.  Normally, I don't like a lot of description, but she does it with great skill, and I didn't skim as I often do.  Although styled as Christian fantasy, it's a great read no matter what your faith beliefs are.  No wonder it won the Christy award.
Posted by Karina Fabian at 12:30 AM No comments:

Daughter is home! Parents coming down! It's going to be a wonderful Christmas.  I'm taking the week off, so enjoy your holidays and God bless us, every one!
Posted by Karina Fabian at 5:00 AM No comments:

Editing your manuscript: Read it backwards 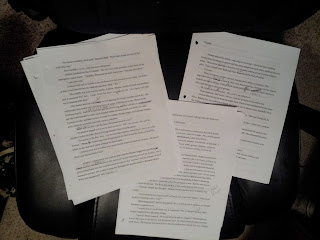 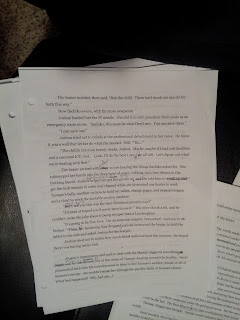 Now, the fun begins! Having finished my first draft of Mind Over All and done the first read-through and edit on the computer, I am now editing the document by printing it out and reading it backwards, one sentence at a time, from last sentence to first. Why would anyone edit a document that way?

* It separates the sentence from the plot, so that your brain is less likely to fill in missing words, skip bad grammar, etc., because it's focused on the story.
* It lest you analyze each sentence for clarity and beauty.
* It makes repeated words and bad habits stand out.
* It stops you from scanning or skipping over parts you know too well.

I'm about 20 pages into my backwards manuscript edit of Mind Over All, and I've already made about 200 changes.  Give it a try sometime.  It takes a lot of time, but the end result is worth it!

Email ThisBlogThis!Share to TwitterShare to FacebookShare to Pinterest
Labels: how to edit a manuscript, manuscript editing

Mini-Review: Edith Stein, An Introduction into her Life and Thought, Edited by John Sullivan

For the fourth volume in this series the Editor has chosen articles about the recently beatified Carmelite nun and philosopher convert, St. Teresa Benedicta of the Cross/Edith Stein. Six authors examine the life, thought, martyrdom and beatification. Included is the full text of the homily given by Pope John Paul II at the beatification ceremonies in Cologne on May 1, 1987. Homily at Beatification "For Edith Stein baptism as a Christian was by no means a break with her Jewish heritage. Quite the contrary, she said: 'I had given up my practice of the Jewish religion as a girl of 14. My return to God made me feel Jewish again.' She was always mindful of the fact that she was related to Christ 'not only in a spiritual sense, but also in blood terms.' She suffered profoundly from the pain she caused her mother through her conversion to Catholicism. She continued to accompany her to services in the synagogue and to pray the psalms with her. In reaction to her mother's observation that it was possible for her to be pious in a Jewish sense as well, she answered: 'Of course, seeing as it is something I grew up with.'"

I enjoyed getting the different perspectives on this complex saint.  It's more academic in approach than many saint books I've been reading, and is better for someone who is familiar with her life or has already read a comprehensive biography.

Buy it on Amazon: http://www.amazon.com/Edith-Stein-Introduction-Life-Thought/dp/1936855143

Excerpt from Mind Over All: Joshua plays the Organ

I'm doing the first edit on Mind Over All.  It's slow going because of work, but overall, I'm pretty satisfied with the story.  In this one, the planets Kanaan and Barin are going to collide, and Deryl has to find a way to stop that from happening. Meanwhile on Earth, Joshua's mother is dying from the same disease that killed her father.  Joshua is home for a few days because she's in the hospital and they aren't sure she has much time left.  As usual, he's turned to music for stress relief.  In this scene, he's playing the big organ at church, working on a composition that might be his mother's requiem, when Deryl shows up out of the blue.


Joshua slammed his fingers on the keys of the upper and lower manuals of the grand church organ, and the chord blasted through the pipes—heavy, minor, anguished.  He let it hang, and then played five notes on the choir—why why O God why?—slowly at first, building momentum, increasing in speed until the notes tripped on each other, spilling into new notes.  Those notes growing in number and intensity until a crowd of music cried in grief.  Then: a single note, high and clear, rises above the rest, pleading, asking for…
His hands froze.  His fingers didn’t know what to play next.
Joshua thumped his elbows on the keyboard, making it blare, and buried his face in his hands.
“That’s an interesting ending,” someone behind him said.
Joshua gave a start.  He’d thought he was alone.  He wiped his face with his hands, hoping the person would notice only his sweat and not the tears.  “It’s a work in progress.”
“I didn’t know you could play organ.  Is it more difficult than the piano?”  The person climbed the short steps and sat on the bench beside him.
Joshua glanced at him long enough to take in the dark hair, brown eyes, and short sleeve polo that was totally wrong for the freezing weather outside.  “Sorry.  I’m…tired.  Do I know you?”
The man laughed as if he’d played a great joke.  “Seriously? A new hairstyle and contacts, and you don’t recognize me?  Maybe I should go harass Malachai next.”
“Malachai?  Dr. Randall Malachai?”  Something clicked in Joshua’s overwrought brain, and he gave his visitor a closer examination.  Blue eyes for brown; long blond hair, add a slouch that came from years of resentment and lack of self confidence… Could it be?  Despite his prayers, he couldn’t believe it, and yet…  “Deryl?” he whispered.
Posted by Karina Fabian at 12:30 AM 1 comment:

When Grace’s life is in danger, Vern will do just about anything to find a cure—but will he sacrifice the fate of two worlds for her life?
Order from Amazon

I Left My Brains in San Francisco

Neeta takes on radical environmentalist zombies bent on destruction and mayhem for the sake of our most natural resource--manure!
Order from Amazon

A chilling Tale of Deryl's early years with telepathic abilities. (Deryl is from Mind Over Mind.)
Order from Amazon

"The Faerie Truth Behind the Fairy Tales"

Vern writes about fairy-tale-based scams in Mother Goose is Dead.
Order from Amazon

What do you do when the voices in your head are real?
Order from Amazon

Classic Sci-Fi with a Twist of Faith
Order from Amazon

Faith Stories by Karina and her dad, Deacon Steve
Order from Amazon

Because God and Science Can Co-Exist!

Order From The Writers Café Press Dragons as You've Never Seen Them Before